Agent Washington, previously referred to by his real name of Nick, is a member of Project Freelancer: Rebirth.

Agent Washington wears the original Agent Washington's original armor, although it has since been upgraded. It is the default Mark VI armor, with the addition of a tacpad on the left arm.

He has a spare white JFO helmet with a blue visor. He doesn't wear it due to it being "the wrong freaking color for the rest of [his] armor". He plans on repainting at some point in the future, but has not done so yet.

Washington is analytical, somewhat sarcastic, and slightly egotistical, and tends to get angered quickly. He rarely acts based upon that anger though. When not angered, he is generally calm, and can manage stressful situations relatively well. However, when in a very good mood (which is not common for Wash), he acts rather goofy and friendly. Wash reluctantly trusts the Freelancer team, simply because they can accomplish more together than by themselves. He has yet to have any significant interactions with the rest of his team. He is one of the least competitive of the Freelancers, as shown by him barely caring when he lost his place on the leaderboard. In addition, Washington would rather follow orders and complete the mission rather than show off and make himself look good. As a result, he rarely has problems when paired with another Freelancer for missions.

Wash is willing to sacrifice himself without hesitation, but only if the potential outcome outweighs the risk and cost.

Washington is an expert marksman with medium range weapons such as the Battle RIfle. DMR, and Pistol. He is also skilled with the Shotgun, although he doesn't use it as often, saving it for close ranged combat. He is one of the best shots in the shooting range, capable of rapidly changing targets with his rifle and hitting three different targets with the three-shot burst. He is also an excellent hand-to-hand fighter, preferring skill and precision over brute force and strength. One area he does not excel in is sniping. Although he is capable of using the Sniper Rifle, it quickly angers him. He also has a dislike towards enemy snipers, calling them "annoying little pricks" and "freaking bullshit". He does see their usefulness in combat, but prefers to leave sniping to those better suited towards it. He has limited experience with heavy weaponry, but has shown to be capable of taking out mobile targets with an unguided Rocket Launcher. He is fairly skilled with grenades, capable of bouncing a frag grenade off of surfaces to get it to its intended location. He also claims to have "Stuck an enemy right in the face with a plasma grenade from across the battle on [his] first throw ever with one."

He also has significant experience with computers. Although he isn't a computer expert, he was able (after getting quite angered) to use a terminal to control various operations on an enemy computer system, such as opening doors and disabling cameras. He is quite skilled in the use of his tacpad, and has more than once come up with ingenious uses for it.

Another of Washington's talents is his cleverness. He can quickly learn how things work, and come up with "out of the box" solutions rapidly. He is also quick to identify problems with others' plans, occasionally bothering others while doing so. When encountered with an unknown device, Wash is often among the first to gain a basic understanding of its operation.

Washington is fluent in English and Spanish, and has learned a fair amount of German from Wyoming.

Washington has a prototype Variable Armor Lock device built into the back of his armor. This armor lock differs from previous versions by allowing varying levels of mobility at a loss of protection. While nearly invincible while stationary, it also allows for admittedly sluggish movement at a drawback of damage bleeding through the Armor Lock. It also has the ability to release a shockwave of energy, temporarily disabling the unit.

Washington also possesses a jamming device capable of disrupting radios and radar within a close proximity, Unfortunately while using this, he also disrupts his own radio and radar as well.

Assault on The Base

Agent Washington and the other 8 freelancers responded to an alarm alerting that their base was under attack. He was in Group 2 with South Carolina and Maine. When Maine was injured, Washington provided cover fire before running over to Maine and shielding him with his Armor Lock. Connecticut kicked an enemy soldier towards Washington, but before he could shoot him, North Dakota sniped the soldier. Afterwards, Washington was unable to accompany Maine to surgery.

The Freelancers, minus Maine, were told by the Director to observe tryouts for three new Agent positions: South Dakota, Nevada, and Arkansas. The tryouts took much longer than expected, which led to Washington becoming slightly annoyed. After 5 days, three Agents were chosen: Drake Hawkings, Emily Wilson, and Anderson Smith.

Washington, York, North, and Carolina were joined by Maine and Connecticut when an unexpected training session began between South Dakota and a team of Utah, Wyoming, and Texas. Washington and the other Freelancers were impressed with South's skill. Agents Nevada and Arkansas entered the observation room right before the third round and they all witnessed Texas become severely injured. York led them to the training room and Washington called the Director to inform him of the situation. With South Dakota and Texas gaining positions on the leaderboard, Washington lost his, but gave it little concern.

Washington was part of Team 1 with North, South, and Carolina with the objective of securing a hard drive. They were dropped off from a Pelican at Floor 76 of the ONI Building. They needed to continue an addition 12 floors on foot. On the way, they proceeded into a room full of grenades and set off an alarm. They quickly found themselves surrounded. The team quickly used their armor abilites, Washington using a shockwave from his Armor Lock to send 10 soldiers flying through a window. They then proceeded to engage a gold-armored soldier, who shot the grenades causing a chain reaction. As the building collapsed, they took a platform to the roof. Unfortunately their Pelican came to late, and the team began to fall. Carolina and South were able to get into the Pelican, but Washington and North were not. They were eventually picked up by another pelican, which was soon attacked. He is unable to assist an unconscious York due burning piece of metal impaling his neck, causing him to cough up blood and nearly die. South managed to save him by kicking him to the other pelican.

Washington quickly recovered from his injuries with no permanent effects and attended York's funeral. Afterwards, while the Director berated him and the rest of Team 1 for their failure, Washington was level-headed enough to quickly notice a discrepancy in what the Director told them. However, the Director immediately told him to stop talking.

Washington has yet to make any true relationships with the Freelancer team and is often distant to them. However, as time goes on, they begin to grow on him. Despite being rather distant, he has no problem with working with them or engaging in conversation.

Washington follows the Director simply because Project Freelancer gives him the chance to accomplish much more. The Director seems aware of this, but doesn't care. The Director likes that Wash is not competitive, and that he would rather complete the mission than show off.

Wshington and Maine have had little interaction so far. During the attack on their base, Maine was injured and Washington was the first to go assist him and covered him while he was down.

Washington has no problem with South's quiet attitude. They have yet to have any significant interactions. He seems impressed with South's abilites during the training session.

Washington became slightly annoyed when North stole his kill, but has no ill feelings towards him.

Washington has also had little interaction with Carolina. Although they have are indifferent towards each other, out of all the freelancers, Washington pays the least attention to Carolina.

Washington has been distant towards Connecticut as he has been towards the other freelancers. Connecticut frequently tries to get Wash to open up. Although he has not yet done so, he has not shot down Connecticut's attempts either.

Wyoming and Washington have had little interaction. The two of them frequently switch positions on the leaderboard, which would have led to rivalry if Wash was competitive. Instead the two get along relatively well, with Washington picking up German from Wyoming.

Washington and Texas don't talk to each other much, but unlike many other Freelancers, Washington hasn't gotten on Texas's nerves.

Wash tends to get annoyed with Arkansas's excited behavior and personality, but doesn't have a problem with him. 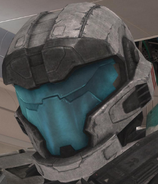 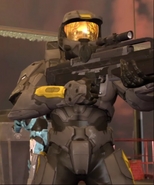 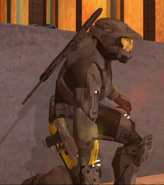 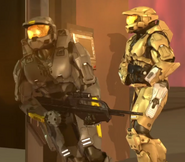 Wash looks to the side

"There's these stupid hexagons on my picture."

Connecticut tries to get Wash to open up.

Close up of Wash's helmet

Wash looks at a schematic of the ONI Tower

Washington getting ready for action.
Add a photo to this gallery
Retrieved from "https://rvbf.fandom.com/wiki/Washington?oldid=17154"
Community content is available under CC-BY-SA unless otherwise noted.