"There's always that one person in life that makes it truly worth living."
—Iowa on his relationship with California

Daniel Hoffman, otherwise known as Freelancer Agent Iowa, is one of the primary protagonists along with Agent California in Red vs. Blue: Strikedown. Orphaned at a young age, he grew up in a life of loneliness and sadness. He later joined the military at the age of 16, and his exceptional combat skill led to him coming under the employ of Project Freelancer.

Daniel grew up in a small neighborhood in the middle of Iowa with his father Michael, mother Clarice, and older brothers James and William. Daniel was a very quiet and shy boy in his childhood. During his early school years, he showed exceptional talent with computers and other electronics. Tragedy befell the young Daniel when, at the age of 7, his mother, who worked as a scientist for the UNSC, was killed in a horrific lab accident. This incident deeply hurt Daniel and his family. Hoping to get away from the whole ordeal, Michael took his three sons on a road trip to Minnesota. Although William and James had begun feeling better about their mother, Daniel was still horribly saddened by it. It wasn't even over for him, for on their return home, tragedy struck again. William and James had been taking off their seatbelts as dares with each-other. Michael had become agitated with the two, and turned to tell the two to put their seatbelts back on and to be quiet. Michael, while turning, accidentally undid his seat-belt, and at the worse timing, and they collided with a semi-trailer moments afterwards. Michael was thrown forward, out the windshield, while William and James were thrown forward into the seats in-front of them. By the time paramedics arrived, Daniel was the only one alive, the others having died from blunt force trauma. Within a week, his parents and siblings were all dead.

After his family's deaths, Daniel would be sent between several different foster homes. The traumatized Daniel alienated himself from his peers, believing that if he grew attatched to them too, then they would suffer. Daniel continued to excel in academics none-the-less. At the age of 12, Daniel attempted suicide by overdosing on some medication, but was saved by the arrival of his foster brother. At age 13, he attempted suicide again, this time by trying to drown himself. However, the rope he used to tie himself to a cinderblock and keep him underwater in the pool snapped. Coming to the conclusion that life would not allow him such an easy exit, he gave up trying to kill himself. Throughout these years, Daniel took up fighting classes so that he could defend himself at school if needed. By age 16, Daniel was and exceptionally skilled at computer hacking, having hacked into the school network and changing everything so that trying to open a file or start a program would lead to a pornography website. Deciding that continuing school would be a waste of his fighting training and tech. skills, Daniel decided to dropped out and enlisted in the military.

Entering the military at age 16, Daniel showed remarkable fighting skill, beating out 4 of the toughest soldiers the trainers knew in hand-to-hand combat. He also ranked high on his IQ test, scoring in the 90th percentile. Impressed by his show of talent, the UNSC sent him to work with a team in taking over an enemy communications center. Despite the training the guards in the building received, they were easily beaten down by Daniel. Hacking into the communication tower, they managed to call down an air-strike which decimated the enemy base. Little did he know that he was being watched by Project Freelancer, who decided that they could use skill like Daniel's.

Upon his return, Daniel was greeted by a recruiter from Project Freelancer. Although Daniel held little interest in the recruiter's offer at first, Daniel decided that by doing so, he could be putting his talents to good use. On his 17th birthday, Daniel left the UNSC to join Project Freelancer. There, he met the first person that he felt any sort of friendship with since his family died, Emily Chase, who would later become Agent California. There, Emily and Daniel became aquanted and became fast friends. During training exercises, they would always help each other out whenever needed. Upon finalizing his training as a Freelancer, Daniel was given the A.I. Psi and partnered up with California. Following the Epsilon Incident, Psi was removed for evaluation. Following this, Iowa and California decided to take on jobs with each-other until they were called upon by Project Freelancer.

Given his troubled past, Iowa has preferred to distance himself from others, believing that it was his fault for the incidents that killed his family. Upon meeting California for the first time, he turned his personality into a more positive and outgoing one. Being intelligent and skilled in close-quarters combat has made Iowa a model soldier. Though he can be a bit of a trouble-maker at times, Iowa knows perfectly well the difference between a harmless joke and a serious offense.

As a close-combat specialist, Iowa tends to use a Shotgun and Assault Rifle to get the job done, though he is prefectly capable of utilizing other weapons as well. He was also given a pair of wrist mounted blade launchers by Project Freelancer after losing his original Specialized Hacking Kit. Later, using equipment gathered by Project Freelancer, Iowa upgraded his blade launchers with energy shield emitters, allowing for two small energy shields akin to a Skirmisher Champion's point defense gauntlets. 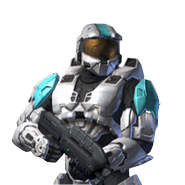 Iowa's Original Mk VI Armor
Add a photo to this gallery
Retrieved from "https://rvbf.fandom.com/wiki/Iowa_(Jonsey117%27s)?oldid=4945"
Community content is available under CC-BY-SA unless otherwise noted.