"Pwned! Sorry, bird. Gotta do a job."
—Krayson after knocking Alexa down.

Daniel Krayson is the leader of Blue Team in RP: Battle of Blood Gulch, and a certified melee fighter. He is famous for his light attitude in most situations, finding humor in almost everything.

Little is known about Krayson's family history, but his father served at Sidewinder under Blue Team. When Tex killed him, Krayson earned his hatred of almost everything Freelancer, even tearing down a recruitment poster at his school.

When he became old enough, Krayson joined the army, and because of his light-heartedness, found himself sent to a recently attacked Covenant outpost. He killed an Elite, and stole it's Energy Sword, which later became his main weapon.

When Krayson first walked into the base, he found Lawrence and Jenkins arguing about shower rights. Krayson quickly stepped in and stopped the fighting, earning a reputation as a peacekeeper. He is determined to make Jenkins smile at least once.

On a recon mission to chekc out the Red Base, Krayson and Swanson where attacked and captured by Alexa. After questioning them, she shot Krayson in the stomach, taking them to Red Base. While captive, Krayson was treated by Maddox, who he struck up a friendship with.

Finally, Jenkins came to rescue them in Blue Team's Falcon. Krayson knocked Alexa out, apologizing and running toward the Falcon. All Killgrave could do was fire with his pistol as they left, while Madddox and Alexa watched silently.

As they left Red Base behind, Krayson quipped about Alexa, "I didn't even get her helmet phone number". This gave the crew a laugh.

Krayson was scouting with Jenkins when Iron Fist punched Swanson. He continues his search for ????, but has no leads.

While Krayson is rather light-hearted, when it comes to his teamates and the other team, he becomes a cynic. Always on edge, he constantly flies into rage when just the word 'Freelancer' is mentioned.

"Want a drink? Unless you've decided to be sober tonight?"
—Krayson talking to Swanson.

Krayson used to be good friends with Swanson, but with the arrival of Iron Fist, as well as Song, he has distanced himself slightly. Thinks he might be a spy for the Reds.

"It's like this, mate. Either you're going to brighten up, or you can run over to the Reds and have them kill you. Either way's allright with me."
—Krayson reasoning with Jenkins.

Krayson believes that Jenkins can be happy, but still has little patience for him. Is forced to scout with him, because no one else will.

"Umm hmm. I see. Well, just go count the rocks on the other side of the base."
—Krayson talking to Martinez.

Krayson enjoys talking to Martinez, but is still worried that he'll kill him one day. Continues to keep himself seperate.

"Me and 'Fist? We go way back. Like, before the dinosaurs back."
—Krayson explaining about Iron Fist.

Krayson and Iron Fist are best friends, willing to do anything for each other. However, Krayson keeps him at a distance for an unknown reason.

"Have you even had a beer?"
—Krayson talking to Sam about his drinking habits.

Krayson is glad that Sam follows orders, but is a little disturbed Sam wants him to stop drinking. He occasionally slips Sam a drink.

"He's like a child with a gun."
—Krayson commenting on Killgrave's personality.

Krayson has a negative relationship with Killgrave, accusing him of having no goals. He also thinks some intelligence is required to lead, something he believes Killgrave lacks.

"You know, you think there would be more doctors in a place like this..."
—Krayson talking to Maddox

Krayson finds it funny that Maddox is the only medic in the canyon, and a good one at that. When he was being treated for a gunshot wound, he actually invited Maddox over for drinks sometimes.

Occasionally, when drunk, Krayson admits Alexa reminds him of someone 'he's trying to forget.' Nevertheless, he finds it a personal joke that a women is in the canyon, even more so that she shot him. Some might note that when escaping in their Falcon, Krayson waved at her.

"Those bloody shoes nearly took my bloody head off!"
—Krayson yelling at RS.

Krayson is slightly annoyed that Clay's shoes nearly killed him, but puts it aside. Most of the time. Barely talks to him.

Krayson has a grudging respect for Song, but suspicous of his friendship with Swanson. Is worried that Song is using Swanson as a spy.

"What's wrong with enjoying yourself? Blimey, it's like everyone here's insane."
—Krayson commenting on Jenkins's attitude

Krayson can be described as rather light-headed. He is bold, reckless, and enjoys a good laugh. However, that doesn't stop him from being one of the best fighters on Blue Team. Determined to get Jenkins to smile at least once.

"Me dad was the sniper, me mom was the melee fighter, n' they both poured it into this bloke."
—Krayson discussing his battle tactics

An excellent melee and long range fighter, Krayson inherited his fathers' sniper rifle, and gained his energy sword from the Covenant. He is most famous for the time he sliced through the Reds' Warthog with only one movement of the energy sword.

One of the most common positions you can see him in is on top of the Base, on a lawn chair, staring at Red Base with a drink in his hand. 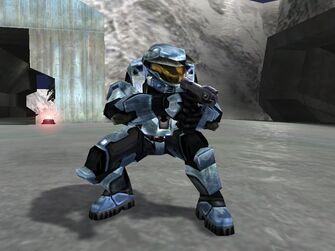 Krayson sneaking up on prison guards. 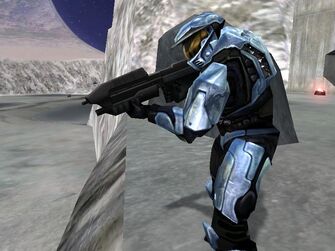 Krayson talking to ???? at the prison. 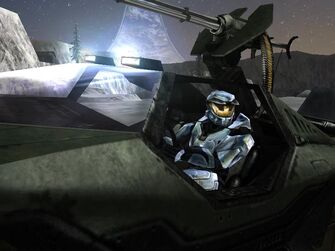 Krayson waiting for ???? in the Warthog after the Prison Break. (Krayson, you ladies man, you.) 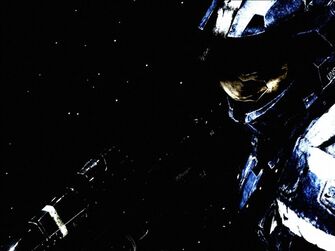 Retrieved from "https://rvbf.fandom.com/wiki/Daniel_Krayson?oldid=7289"
Community content is available under CC-BY-SA unless otherwise noted.